Lining Up for Star Wars: The Last Jedi

The LiningUp.Net Line for Star Wars: The Last Jedi was fun-filled to be sure.  The Line Up started on the evening of December 7, 2017 with a number of the Line being given seats for the 200th Episode of Fatman on Batman (now called Fatman Beyond) being held in the forecourt of the TCL Chinese Theatres Imax instead of Scum & Villainy Cantina.  Scum & Villainy was present to provide non-alcoholic Star Wars themed drinks for donations to Starlight Children’s Foundation.  The TCL Chinese donated a 55-inch TCL 4K HDR television to be raffled off.  The raffle tickets were $10 each and all of the proceeds went to the Starlight Children’s Foundation.  I bought two raffle tickets and got a blue milk drink. 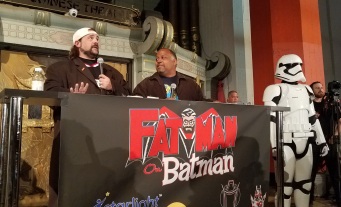 I managed to get a seat in the front row for the podcast.  You can watch the video of the podcast here.  Spoiler: I won the tv!!  I was in need of a new tv as I had recently moved and didn’t take my old one with me since it was near its end.

That Justice League popcorn tin has the winning ticket!

I gave myself a craft project of making some felt and yarn Princess Leia headbands for Line members and whomever else would want one.  Using hot glue in cold weather made this project a little difficult.  I used some scraps to make a mini headband for the Porg plush of one of our young Line members.  The headbands also doubled as earmuffs to keep us warm. 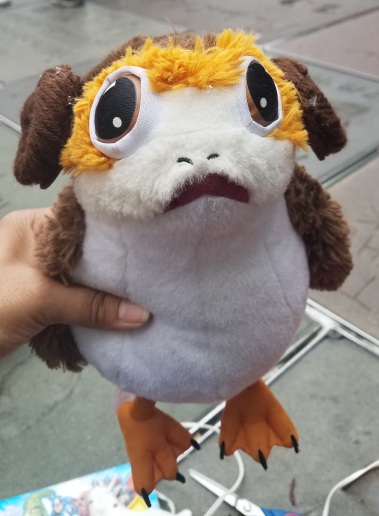 As usual, there were press around doing interviews and taking photos of the Line.  One of the nights, Red Robin made a generous donation to the Starlight Children’s Foundation and provided the line with free dinners of burgers and sandwiches.  Skywalking Through Neverland podcast brought the inflatable At-AT and hosted Star Wars trivia with prizes.

Some of our late night shenanigans included all night Cards Against Humanity session and trapping a Line organizer in his tent. I didn’t sleep in a tent the night they did the tent thing. I woke up to giggling and saw what they were doing.  I took a couple of pictures and went back to sleep.

A celebration for Carrie Fisher was held the in the afternoon on the last day of the Line Up, December 14, 2017, prior to the screening on opening night.  An image of a plaque which will be placed in the forecourt in honor of Carrie Fisher was revealed.  The forecourt was closed to the public during the ceremony and only press and the Lining Up group were allowed to be inside the barricades.  There was also a cake which was cut after the plaque announcement ceremony which included some words from Todd Fisher, Carrie’s brother.

There was an after party for the Lining Up group held at the TCL Chinese 6 Theatres after the movie where we ate pizza to our hearts content and played some games provided by Dave & Busters which has a location at the Hollywood and Highland Center, too.

My BB-8 drink cup and straw

Go to LiningUp.Net for more information on past and future Star Wars Lines.  You can also follow them on Instagram (@LiningUp_net) and Twitter (@LiningUpNet), and be sure to check them out on Facebook here.

Get information on the amazing work the Starlight Children’s Foundation does here, and be sure to donate here.

May the Force Be With You.

Surprise guests appearance by Kevin Feige, Destin Daniel Cretton, Meng'er Zhang, and Simu Liu at the 7pm show of @Shang-Chi at the @chinesetheatres
I still have an hour to kill before heading to the @chinesetheatres hinese Theatre. Only 1 Shang-Chi item at Hot Topic (t-shirt), and they're sold out. Ghirardelli has mostly a few toys. This is disappointing.