On Friday, May 17, 2019 Cinespia hosted a free screening of the first episode of the new Amazon Prime Video / BBC2 show, Good Omens.  Good Omens is based on the book of similar name (Good Omens: The Nice and Accurate Prophecies of Anges Nutter, Witch) collaboratively written by Neil Gaiman and Terry Pratchett.  The television show stars David Tennant and Michael Sheen and is written by Neil Gaiman.  Miranda Richardson, John Hamm, and Frances McDormand help round out the series cast.  The series is six episodes and were released on Amazon Prime on May 31, 2019 in the United States, but it is being broadcast weekly in the UK on BBC Two later this year.  There isn’t an official date for BBC Two, but it’s been said that Neil Gaiman has said Good Omens will begin broadcasting on BBC Two in November or December 2019.

As mentioned above, we attended a free screening of the pilot episode hosted by Cinespia at the Hollywood Forever Cemetery.  I hadn’t been to a Cinespia screening prior to Good Omens, but absolutely look forward to attending another screening this summer, scheduled permitting.  Cinespia usually hosts screenings of movies during the summer.  The films are projected onto the side of the mausoleum, and there is usually a DJ playing music before the film and a photobooth or two.  Bring a low chair and blankets, pack a picnic or you usually can buy food and drinks there, and watch a movie under the celestial stars near dearly departed Hollywood stars.  Check out Cinsepia.org for more information and this year’s scheduled films.

Because the Good Omens screening was free, it was especially crowded, but we were also given free concessions, and there were plenty of photo booths and photo ops around the area.  There was a large section at the front and center of the mausoleum reserved for VIP, and there were security there.  I recognized the security staff from red carpet events around Los Angeles, so I knew this was a section for invited celebrity guests.  I did manage to spot Josh Groban arriving to that area.  They had seats and blankets along with large baskets of goodies supplied.  They also had a dedicated bar in their section.   Neil Gaiman came and gave an introduction to the show prior to the screening.  I was a bit surprised they only showed the first episode as screenings for television series usually consist of two episodes, but with only 6 episodes for the series I can understand why we only got to see the pilot. 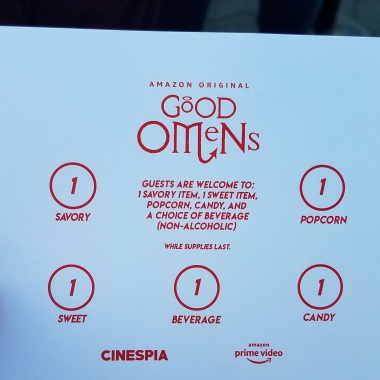 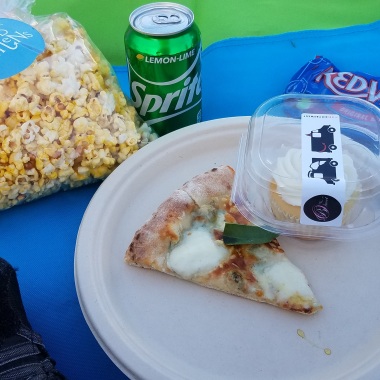 I enjoyed the episode, but I won’t go into detail since it hasn’t aired in the UK, yet.  I haven’t watched the rest of the series, yet, either.  It was really funny, and I love the friendship between the demon Crowley (portrayed by David Tennant) and the angel Aziraphale (portrayed by Michael Sheen).  (Note: There was a full moon the night of the screening.)

When you see Cloud 9 Superstore shopping cats at your local ReStore!!
Just watched @shangchi for the 4th? time at @chinesetheatres Imax.